I don't have the best grasp on A&P Canada's 1950s and 1960s architecture. Many of the stores from that era in southwest Ontario have either been demolished or renovated beyond recognition. A&P Canada also had a reputation for being a quasi-independent corner of the A&P empire, with its own practices and store designs different from those of A&P US. Nevertheless, I've seen evidence that A&P did make limited use of the colonial/centennial store design in Canada. (I suppose they couldn't have gotten away with calling it "Early American.")

But how many A&P centennial stores exist in Canada? So far, I know of only three... 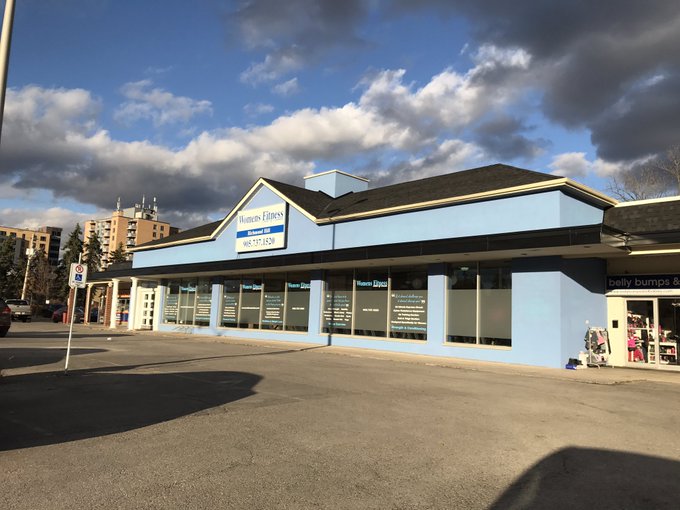 1050 Kipps Ln., London, ON; photographed by me. This store appears to have had a short operational history, both coming and going within the duration of the 1970s.

1165 Oxford St. E., London, ON. An "off-model" centennial with a central peak (and telltale A&P canopy braces), but no full-width pitched roof. The building was completely gutted to the bones a year ago, so I'll never get a better picture.

Are there any others? I'd get a kick out of seeing one of these buildings decked out as a Metro or Food Basics; though my hopes aren't high...
"The pale pastels which have been featured in most food stores during the past 20 years are no longer in tune with the mood of the 1970s."
Andrew Turnbull
Top

While researching Sudbury today, I discovered a fourth Canadian centennial: 1532 La Salle Boulevard, Sudbury, ON. This is an "off-model" Centennial like Oxford Street in London, with a peak and cupola but without a full-width pitched roof. It opened as A&P by 1970 and operated through at least 1981, closing by 1985.

Two others I know of - though both are renovated beyond recognition now. 700 Burnhamthorpe Rd E, Mississauga, ON L4Y 2X3 - now a Shoppers Drug Mart, and 5559 Dundas St W, Toronto, ON M9B 1B9 - now a Food Basics. This one is built as part of Metro Ontario’s office / distribution complex - which was formerly A&P Canada’s Home Office.
Top

Thanks for the locations! Looking on Google Street View, the renovated Dundas store is decked out in what I call the "split-level" facade from circa 1980...which is old and interesting in its own right. And any store built into a distribution centre is unusual enough to be worth visiting!

Most of the research and physical evidence I've gathered suggests that A&P Canada built modernist stores into the 1960s, and didn't start using the US-spawned centennial architecture until the latter half of the decade. That would help explain why these buildings are so uncommon here.

But they did exist, and they existed as far north and west afield as Thunder Bay. Not long ago, I located an image in the Thunder Bay Museum's files of an A&P at 505 Arthur St. W. that opened in Fort William in 1967 (accession #984.80.2266). The store looks identical to its stateside counterparts aside from the fact that the historical proclamation reads "Since 1927" instead of "Founded 1859."

This store remains in business today as Metro...but alas, as with the examples upthread, it has been completely and thoroughly de-centennialized. The building has been expanded considerably both in front and to the right side, and the pitched frontal roof has been completely dismantled as if it never existed at all. The left brick wall is the only trace of the original store that remains intact.
"The pale pastels which have been featured in most food stores during the past 20 years are no longer in tune with the mood of the 1970s."
Andrew Turnbull
Top
Post Reply
4 posts • Page 1 of 1