The latest news from the annals of London supermarket research...

Remember Superior, the voluntary grocery chain whose affiliates ruled London from the 1940s to the 1960s? Just a couple posts upthread, I said...

Andrew T. wrote: ↑27 Jul 2019 11:03By the late 1960s Superior was in free-fall, and a decade later there was only a single store left: Gates Superior at 730 William St., which was hollowed out of the lower story of a house and scarcely qualified as a supermarket. By 1985 even this was gone.

As it turns out, Superior had more lasting power than I thought! A 1979 newspaper ad I found lists four Superior affiliates in London itself (none of which is Gates, oddly enough), and literally dozens of locations in the small towns that surround it:

Another interesting thing I discovered was that by 1979, Superior stores were supplied by Elliott Marr & Company...a division of the Oshawa Group. How long after 1979 Superior lasted, I don't know...but due to the Oshawa connection, it's likely that their stores were simply rebranded as EMA, Price Chopper, or Foodland instead of disappearing into the ether entirely. I wouldn't doubt that some are still operating as Foodland today.

OK, another interesting thing: Feast your eyes on the 1979-era Superior logo! And you thought Safeway had the only circle-S around. Maybe I should call this "the Circle-S from Hell"...

OK, I'll stop now.
"The pale pastels which have been featured in most food stores during the past 20 years are no longer in tune with the mood of the 1970s."
Andrew Turnbull
Top

Not much new to share on London. My efforts to trace the history of store locations were put on hold in 2019 when I moved out of the city.

However, I just caught wind that the Miracle Food Mart-cum-Food Basics store at 1297 Oxford Street E underwent a severe renovation in 2020, completely obliterating the hitherto well-preserved 1970s-mod Steinberg exterior/interior elements and changing the entrance configuration. Such a shame! David and I paid a visit to this store in 2018, and back then it was a blast from the past: 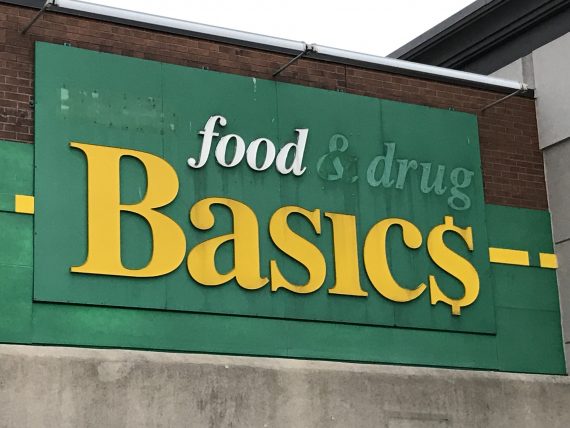 "The pale pastels which have been featured in most food stores during the past 20 years are no longer in tune with the mood of the 1970s."
Andrew Turnbull
Top
Post Reply
32 posts