Last weekend I took a day trip through a swath of southern Ontario, so I was able to check out some of the sites in Guelph (and Kitchener, and Cambridge) firsthand.

Except, there wasn't much to see. Guelph is a third the size of London, and it isn't exactly overflowing with older, untouched, aesthetically-significant retail buildings.

This is 330 Speedvale Ave E, a historic Dominion location opening by 1961. It's presently home to a Sobeys-supplied Fresh Co. store, thanks to a set of transpirations in the last 35 years that I'm not entirely clear on. But I'm not entirely sure that this is the original building: The brickwork doesn't match the rest of the shopping centre.
"The pale pastels which have been featured in most food stores during the past 20 years are no longer in tune with the mood of the 1970s."
Andrew Turnbull
Top

There is a Dollar Tree store at the opposite end of the same shopping centre. Maybe this was the original Dominion? Your guess is as good as mine.
"The pale pastels which have been featured in most food stores during the past 20 years are no longer in tune with the mood of the 1970s."
Andrew Turnbull
Top

Over on 666 Woolrich Street (yes, that is the address), there is the site of a Loblaws store that opened by 1955 and closed by 1974...either at the time of the company's early 1970s financial crisis, or at the time they consolidated their presence in this pocket of Ontario under the Zehrs name.

It now houses a Rexall drugstore. The brickwork has been painted, and the front end has been added onto quite a bit...but if you peer closely, you can make out the form of the original building. It's even more apparent from behind, where a stairstep wall around the barrel roof and a smokestack are still plainly visible.

This was likely only the second Loblaws-branded supermarket that ever existed in the city. The first was a downtown storefront at 110 Wyndham Street North that opened in 1938 or earlier...and lasted all the way to 1970 or beyond.
"The pale pastels which have been featured in most food stores during the past 20 years are no longer in tune with the mood of the 1970s."
Andrew Turnbull
Top

Small update: Historical aerial imagery of Guelph from 1966 is available, and I feel a little more confident now about 330 Speedvale Ave E. The west anchor (where Fresh Co. is) has always been the largest tenant in the shopping centre, and the size is right for a supermarket of that era: 1600 square metres = 17000 square feet. The "bones" of the structure are still intact. The building has however been expanded to 5/3 of its original footprint, and the exterior walls may have been resurfaced and the entrance reconfigured in the midst of this expansion.

As for the Loblaws on 666 Woolrich Street, the most interesting thing I discovered is that the store stood alone in the 1950s and 1960s but a shopping centre sprouted up around it several decades after the fact.
"The pale pastels which have been featured in most food stores during the past 20 years are no longer in tune with the mood of the 1970s."
Andrew Turnbull
Top

A good night for updates. Guelph is now plotted out through the present:

297 Eramosa Road has quite a history: The site of a Steinberg store in the 1960s, later Thrift (whatever that is), later still a Dominion, and even later a Zehrs! When the Google car drove by in 2011, the structure was subdivided between Zellers (left side) and Zehrs (right side). By 2014 Zehrs had annexed most of the Zellers portion, gutted the building to the bones in the midst of renovation, and basically built it anew: 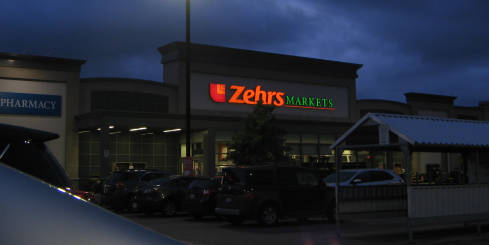 Interesting that the Loblaws brand had already disappeared from Guelph by 1974. Loblaws didn't standardize on the Zehrs name in most of southwest Ontario until 1989, so this was a full decade and a half ahead of the curve.
"The pale pastels which have been featured in most food stores during the past 20 years are no longer in tune with the mood of the 1970s."
Andrew Turnbull
Top

Thrift was a discount Dominion banner. It was common for Dominion to rebrand older and smaller stores to either Thrift or Mr. Grocer in the 70s and 80s.
Top
Post Reply
8 posts • Page 1 of 1