I recently had a chance to go back to West Virginia for a few days, and came across this bizarre Frankenstein-like spectacle of a store in St. Albans while I was there:

Evidently, this was built as a Kroger superstore/SupeRx pair in the 1970s. Then in the 1980s, the Kroger half was either razed and rebuilt or expanded and renovated beyond recognition into a greenhouse store...leaving the SupeRx-turned-Revco-turned-CVS with superstore windows, superstore columns, and two covered-over archways' worth of a superstore parapet.

According to satellite imagery, this was a normal-looking greenhouse until not long ago. But now it's been renovated; 3/5 of the greenhouse glass has been covered over by a boxy facade, and 2/5 is still in place. Weird...

The rest of the shopping center has "turrets" at the ends topped by superstore-facade notches: 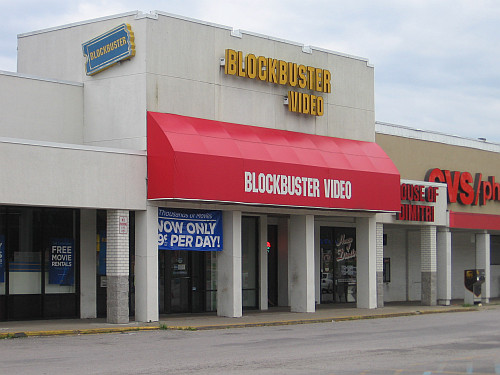 That's wonderful and headache-inducing. You can just sort of view the passage of time from left to right.
Groceteria.com
Top

Judging from the Food & Pharmacy signage, the store has received its own pharmacy during one of its expansions/renovations. All traces of the superstore design have been removed from Kroger while the CVS soldiers on its thinly disguised superstore era SupeRx exterior.

Personally I think the latest iteration would meld better with a superstore exterior than a greenhouse exterior. That the remainder of the shopping center retains its superstore design elements, the Kroger would have looked less out of place as a superstore hybrid with the last remodel.
Top

The turrets used to be entryways to a small mall.
Top
Post Reply
4 posts • Page 1 of 1