Yet another location spreadsheet for David.

Why Springfield, Missouri? I never lived there, but I've visited the city enough times that it feels intuitively familiar. The Skepticon skeptics' conference was held in Springfield for many years (the conference is allegedly moving to St. Louis in 2018), and it was always a stopping point along the way to places further south and west. I'd been mystified by Springfield's chain history before, so I was eager to learn more and cast it into focus at last. Some interesting notes and take-aways:

* Springfield is one of the few places that A&P, Kroger, and Safeway all competed with each other...however briefly or halfheartedly they did!

* A&P had a downright TOKEN presence, with a single store that opened by 1940 and closed by 1946. They must have re-entered the market in the 1960s (if the slightly-disguised Centennial store at 1615 S. Glenstone Ave. is any indication), but that attempt didn't take well, either.

* Kroger's operational history is striking...and not in a good way. The Cincinnati giant entered Springfield with six stores in 1931, but success eluded them and they were down to one store a decade later. So what did Kroger do? They bought Model Market! And as soon as that happened, they entered a death spiral yet again...going from 8 stores in 1950 to 2 stores in 1955 to no stores in 1959. How can you buy a market leader and put them out of business in a decade? Kroger's touch in the Springfield market must have been the touch of death!

* Of the "big three" inter-regional grocers in Springfield, Safeway was the most successful. The "modern" non-marina at 1773 S. Glenstone Ave appears in the 1959 directory, so it was built by then: 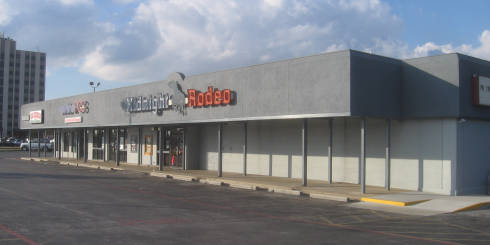 * Consumers Warehouse Markets was founded in Springfield in 1948. They undoubtedly benefited from Model Market's Kroger-induced implosion, they overtook Safeway in store count by 1959, and they were destined to dominate the market for decades afterward. Unfortunately the chain was sold to Fleming in 1990, which probably sealed its demise. (Being linked to Fleming also doomed Sentry, another regional midwest chain.)

So there you go...
"The pale pastels which have been featured in most food stores during the past 20 years are no longer in tune with the mood of the 1970s."
Andrew Turnbull
Top

The single biggest disappointment of Springfield is 707 S. Campbell Avenue. This store was a perfectly-preserved 1940s Safeway that was still selling groceries as an independent market until 2016!

Unfortunately, I had no idea that this store existed during any of my 2010-16 Springfield trips, so I never visited or photographed it. And now, it's too late: The site is an empty field. :(
"The pale pastels which have been featured in most food stores during the past 20 years are no longer in tune with the mood of the 1970s."
Andrew Turnbull
Top

This llst has been added to the site with a map:

Maybe through the present tomorrow or later this week.
Groceteria.com
Top

Doesn't actually seem to be up, the Google Spreadsheet embedded and linked still ends in 1959.
Top

Ah, I did the updates in a new tab and forgot to copy the new data over to the “live“ tab. Should be fixed in a few minutes.
Groceteria.com
Top

I've been somewhat inactive here lately, putting supermarkets and city history on the back burner. But no matter: I'm definitely eager to see the updates for Springfield! Some thoughts...

* 712 N Glenstone was never a chain supermarket. Good to know.

* It's also good to get confirmation that 1615 S Glenstone Avenue was indeed an A&P store! The chain's presence in the city was completely bizarre: Never with more than a single store open at any one time, and with a near 25-year gap in operations! By 1975 they had finally called it quits for good, but it makes you wonder why they ever tried at all.

* As I touched upon upthread, Kroger's early presence in Springfield was almost as chaotic as A&P's. Dillons independently entered the market in the late 1970s, and these stores became part of the Kroger "family" for most of their existence...but not even four decades of operations were enough to preclude their exodus in 2015.

* Of the "big 3" grocers, Safeway had the least-bizarre trajectory in Springfield. Their story played out the same way here as it did in other midwestern markets: They were the dominant chain in the 1950s and 1960s, then entered decline and exited the market by 1985. Reading between the lines of the table, it seems clear that their standing was hurt by a lack of investment and store development: The Marina at 712 W Commercial Street was the only new store that opened after 1959, and the 1940s store at 707 S Campbell Avenue was still operating as a Safeway through the mid-1970s!

* Among other, smaller chains, one name that sticks out to me is Kansas City-based Milgram...which popped up in Springfield when they bought out the local IGA affiliates in the early 1970s, then went out of business half a decade later! I delved into the history of Milgram in Joplin, MO a few years ago, and the story was probably much the same here.

* After Safeway abdicated their local lead in the late 1960s, the title of "#1 supermarket chain" passed to locally-based Consumers, which dwarfed competitors in store count until the 1990s. They sold to Fleming in 1990, which surely doomed them. Asurgent competition from So-Lo, Dillons, and Albertsons didn't help...although all four chains played musical chairs and exited the market one-by-one by 2015!

* Price Cutter emerged in the 1990s and grew rapidly through the 2000s to become Springfield's largest name in groceries...but their store count has dropped from 10 to 6 in the last ten years. Wonder if this could become the next in this city's long line of doomed chains. (As a side note, 2851 Republic Rd should probably be W instead of E.)
"The pale pastels which have been featured in most food stores during the past 20 years are no longer in tune with the mood of the 1970s."
Andrew Turnbull
Top
Post Reply
8 posts • Page 1 of 1