Plunging right into the middle of downstate Illinois:


At risk of living up to their stereotypes, Bloomington and Normal are...well, very "normal" places to research. There are no wholesale street renamings or renumberings to untangle. The cities are of modest size, and their chain history within this 34-year span didn't take that long to parse and research.

The usual triumverate of midwestern chains (A&P, Kroger, National) operated side-by-side in Bloomington-Normal from the 1920s to the 1950s, when National imploded (as usual!). The biggest grocer in the area during this period, however, was Piggly Wiggly: Their store count grew steadily from 1926 to 1951 while competitors shuttered and consolidated stores. As mentioned in the Eisner thread, Eisner ran the Piggly Wiggly stores in Bloomington and Normal from at least the 1940s on...and they rebranded them as Eisner outright around 1957, when Jewel purchased the chain.

Since the data cuts off after 1960, there's a 57-year void separating the last column from the present day. Nevertheless, Bloomington-Normal's grocery market seems grounded in stability: Kroger is still there today, as is Jewel (successor to Eisner). A&P left during one of their 1970s or 1980s market withdrawals, but interestingly there seems to be a bar in town called the "A&P Tap." 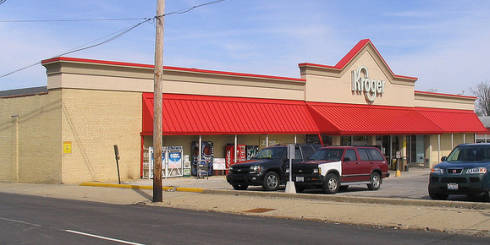 Personally, I've driven through Bloomington and Normal quite a few times on Route 66. My favourite highlight (and one of the addresses on the list) is the old barrel-roofed Kroger store that survives at 1500 (now 1502) North Main Street. It's been through one major expansion (likely from the 1960s) and some front-end remodeling, yet it still has most of its integrity intact! This store opened in November 1956, and I know of only one operational Kroger that's older: 3558 Main in Wheeling, WV, which beats it only by five months.
"The pale pastels which have been featured in most food stores during the past 20 years are no longer in tune with the mood of the 1970s."
Andrew Turnbull
Top

On the site now, with map:

I've updated this page to take it through the present:

This is a nice surprise! It always feels good to flesh out a familiar city.

2507 E. Oakland Ave. is an absolute gem: An early 1980s "double greenhouse" pair with a completely intact exterior (signage, even). Original layout and floor tiling, too, if the pics on Google are any indication! It has the bland but pleasant Ralphs-inspired decor from around a decade ago. I kick myself for not checking out this store when I lived closer to the area.

Though it's not as interesting, the Jewel-Osco at 901 S. Cottage Ave. in Normal is also a decently preserved 1980s specimen.

There's an operational Kroger superstore at 1550 E. College Ave. Alas, this one won't score many points on the originality side: It's an utter train wreck, with a new facade tacked on that doesn't match the original brick. (The original dark brown canopy columns are still visible, and they stick out like a sore thumb.) Inside, the floor tiles have been removed, and it has a hideous modern decor package with signs that look like they're falling off the walls.

Google doesn't seem to know where 918 West Lee Street is. There's a North Lee and a South Lee in Bloomington, but not a West.

I'm intrigued by 1500 N Main Street being listed as "University Market Basket" in 1985. Did Kroger divest this store for a few years, then buy it back?
"The pale pastels which have been featured in most food stores during the past 20 years are no longer in tune with the mood of the 1970s."
Andrew Turnbull
Top

FWIW, the University Market Basket had the same phone number as Kroger, so maybe there was some sort of relationship.
Groceteria.com
Top
Post Reply
5 posts • Page 1 of 1